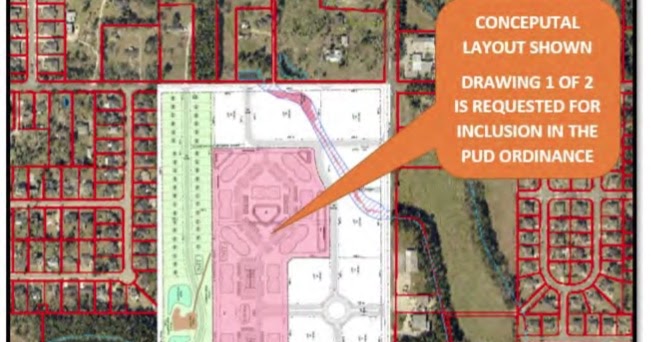 On Monday, October 28th the city council will hold a public hearing and begin considering final approval of the application submitted by owner Gayfer Village Partners for a three part planned unit development on 76 acres of mostly farm land on the northwest corner of Fairhope Avenue and Hwy 181 consisting of:

The property is currently outside of city limits in the un-zoned county; it will be concurrently annexed into the city on approval … and city impact fees will be collected accordingly.

Exact site plans for phases one and two will still need the city council’s approval before construction could begin.

Developer for the project is listed as Tom Mitchell.

According to probate court records, Municipal Judge Haymes Snedeker is the sole member of Gayfer Village Partners, Llc; his law/business partner Ray Hix is its organizer. Hix served on the city’s Airport Authority until last year.

The property was previously owned by the Klump family, where an unpaved airfield by that name operated for many years.

(Usually, the city council will introduce an ordinance then let it “lay over” until its next meeting where the final vote will be taken.)

CATALYST, The Good ole Boys and the Fairhope City Council are all one in the same. In 2020 Fly Creek Apartments will open with 240 units and 77 more planed. On the same street, impacting the same intersection, is another proposed 45 condos. Old Battles Place will have 94 units and now THE “CORRIDOR OF CHAOS”. 232 Apartments, 77 single family houses and 16 commercial units.

That is a total of 566 apartments, 77 homes and 16 commercial units. Just these three projects.

26 Comments on "CORRIDOR OF CHAOS"

THIS IS A TEST

YOUR RIGHTS YOUR MONEY