The Ripp Report has been covering the Baldwin County Mega-Site since it was purchased. 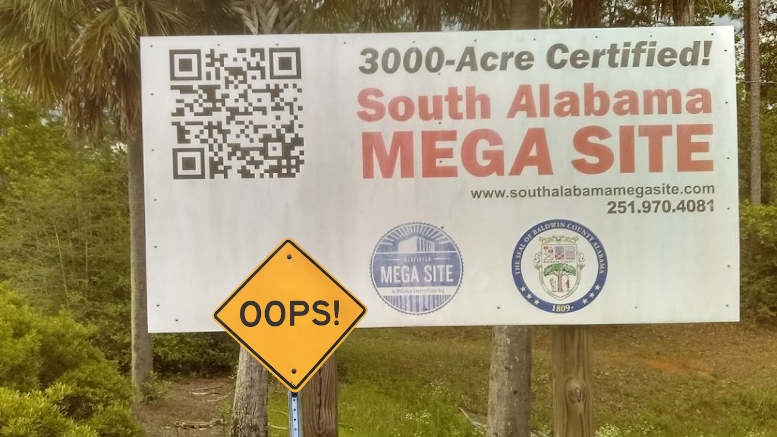 You are going to have to get a free Lagniappe or pay to go on line to read this story. It is obvious that Baldwin County has a media drain. Lagniappe and the Ripp Report appear to be the only sources…

A special meeting of the County Commission, July 25th, has now taken action to qualify the site as “shovel ready”, by authorizing the Baldwin County Economic Development Alliance, big title lot of smoke, to proceed with 7 million dollars of needed infrastructure. Presently there is no contract or letter of intent, for the mega-site.

The Ripp Report attended the meeting and am very sorry to report that not one other citizen in Baldwin County attended.

This Ripp Report is FOR THE RECORD. Read and listen because the Ripp Report intends to give the public an update every 6 months.

This article is full of important information about the mega site and was published prior to the meeting. The County, nor the Alliance, provided as much information to the public, as Lagniappe.

The Baldwin County Commission has advertised a special meeting July 25 to consider an agreement to transfer a portion of the South Alabama Mega Site to the Baldwin County Economic Development Alliance. Today, BCEDA President and CEO Lee Lawson said the Alliance is interested in making infrastructure improvements to 200 acres of the 3,000-acre site …

Baldwin County Economic Development Alliance is known for the smoke they generate, problem is there is little fire. How long will the County Commission be blinded by the smoke? Seven years going on 8 and the alliance always sounds like Mel Fisher, the famous treasure hunter, who said “ Today is the day”. He said that for 30 years before he found the treasure. How long do the citizens of Baldwin County wait for the smoke to clear?

18 Comments on "FOR THE RECORD — MEGA-MONEY"