Alabama has earned it’s reputation as the most corrupt state in the United States. What solidifies Alabama’s position is a perfect puzzle, all tightly fit together with inept, lazy, hypocritical elected officials and oversight agencies. These agencies cost taxpayers millions for absolutely nothing.

The Attorney General, Ethics Commission and Bar Association have earned a reputation of “protecting” it’s fellow inept, hypocritical allies, that are accused of political corruption. The FBI and the Federal Courts deserve a piece of the puzzle for turning a blind eye, or maybe not even opening their eyes and reading what is being published. Compound this sad state of affairs and then add in the police state mentality, which is, “Police do no wrong and should never be held accountable.” This tight little puzzle of no accountability, no transparency and no ethics, is why Alabama is the most corrupt state in the United States.

To frame the puzzle Alabama needs, and has, a weak knee media, governed by a set of diluted standards and a lack of balls. The last thing needed to hang the puzzle, in a frame, is the wire, YOU. YOU, are the wire, the citizen, who reads the stories of our state’s corruption, and do nothing. YOU who are easily sidetracked by national politics while your own state goes down the toilet.

Please read these lagniappe article’s and ask yourself WTF is going on?

The many moving parts of corruption in Alabama

“In fact, no other publication or TV station in the state has written or broadcast a word about the millions in wasted payments to “retired” administrators we discovered, or the attempt to use RSA payments to settle a harassment suit, or even the outlandish perks heaped upon members of the UA Board of Trustees by St. John’s office — including spending $4.3 million on a party house.

The rest of the state’s media also haven’t written about the director of the Alabama Ethics Commission having his children’s college tuition paid for from a charitable trust upon which he is a board member. That story sprung from our UA investigation

It’s kind of hard to believe isn’t it, that newspapers and TV stations across Alabama haven’t told their readers and viewers any of this? One might start to wonder if corruption in Alabama doesn’t all work hand in glove — unethical behavior at the big school is overlooked by the unethical director of the Ethics Commission and the unethical members of the state media look the other way and find something easier to beat on.”

“Listed below are articles exposing land fraud, Judicial voter disenfranchisement, Ethics violations, by no less than the Executive Director of Ethics, Baldwin County Sheriff Office Lawsuits and nine innocent lives lost. Then there is the scared cow of Alabama, the U of A and a culture of silence.”

“UPDATE: Judge Johnny Hardwick, Montgomery Circuit Judge, explained that he had been selected by the Chief Justice Tom Parker to preside over some ethics cases on November 1st. He explained that he read the evidence to my Writ of Mandamus and found it very interesting and wished he could delve into the case. The Judge however decided to recuse himself from hearing our case, due to a potential conflict of interest.”

The Ripp Report has now been notified that a new date for the hearing has been set. 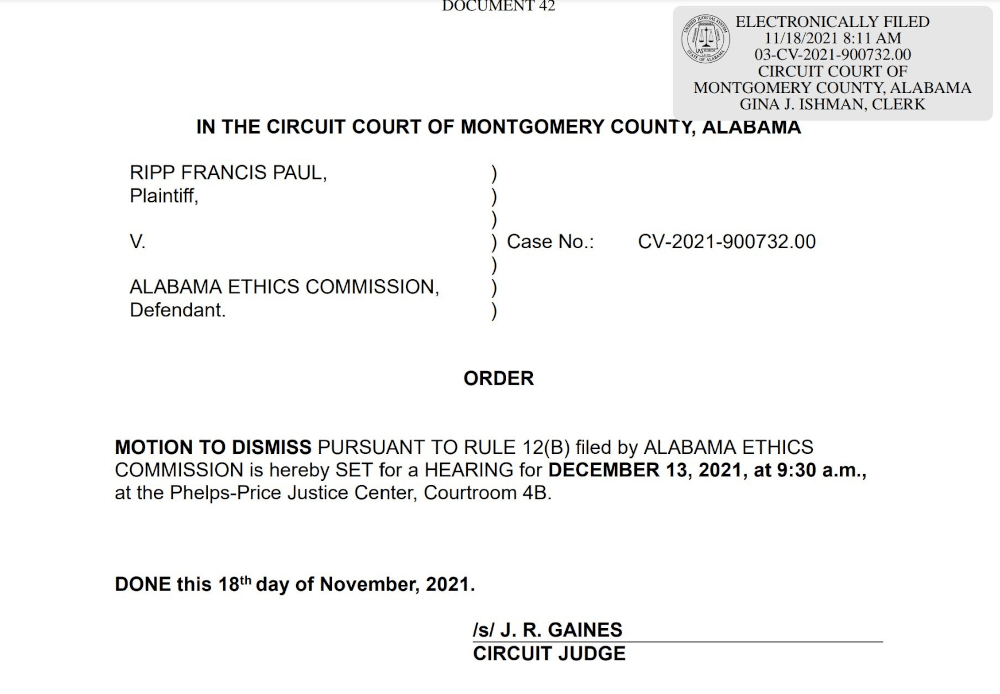 In Alabama being a trustee, board member or councilman, is a pathway for “self serving”, using your position for personal gain. What the hell, you know you are safe from any accountability.

You cannot have accountability when all the parties are aiding and abetting each others conduct.

Thank You Lagniappe for being the only journalists in Alabama willing to expose the corruption.

THE MEDIA SHOULD NEVER BE PART OF THE PUZZLE!

THIS IS A TEST

YOUR RIGHTS YOUR MONEY