The Catalyst Fairhope Council may be in it’s last days. The Council and the council’s legal representative has been asleep at the wheel. Instead of checking out all the legal ramifications of a change of government they selected to remain silent on the matter. They got bad advise and thought the decisions were that of the council and they were in control. WRONG the citizens are in control and Catalyst is worried.

Fairhope please vote for a change of government and put a stop to the most obstructionist council in Fairhope history.

CONFUSION: that is what the council wants you to believe as the main reason for the council taking action to cancel the Oct. 2 election. They want to blame the citizens for their mistakes. The council never sponsored a single forum or public meeting to explain to the citizens anything about the change of government. The Mayor did and she was right and they were dead wrong.

The Council only reacted after the Attorney General weighed in with an opinion that did not sit well with the council. PANIC mode has them trying to spin the issue to the public in any way possible, creating further confusion, hoping to cover their tracks and delay a lawful election.

‘Very confused’: In Fairhope, uncertainty abounds ahead of special election

‘Very confused’: In Fairhope, uncertainty abounds ahead of special election 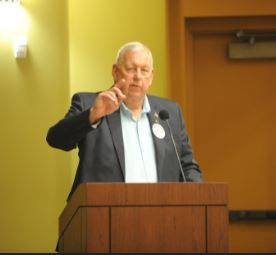 Fairhope voters are scheduled to decide during a special Oct. 2 election whether to change its form of city government from mayor-council to council-manager. During a candidates forum on Tuesday, uncertainty about what the switch might mean dominated a Common Sense Campaign tea party forum.

The most valid reason to change government structure, is the present Catalyst Council. If Fairhope goes to a Mayor/Manager form of government, their will be a Mayor and one councilman at large and three councilman from districts. You would think that would be a compromise.

Please remember the present council is “at large” and the good ole boys need city government to remain “at large”, another valid reason to vote for a change.

Now is the time for Fairhope to move forward, Please vote Oct.2nd for a CHANGE IN GOVERNMENT.

FAIRHOPE CHANGE OF GOVERNMENT The Fairhope City Council is on a roundabout and doesn’t know where to exit. The present Council is an “at Large” council, they are not going to vote for change.

16 Comments on "CATALYST PANIC and CONFUSION"