The Fairhope City Council is on a roundabout and doesn’t know where to exit. The present Council is an “at Large” council, they are not going to vote for change. A YES vote for a change of government allows for 3 district council persons and the Mayor and one council person being “at large. This should satisfy both camps as a compromise, but not the good ole boy council.

The Council is trying to say that they knew nothing until this last week, they can play dumb at the drop of a dime. Mayor Wilson however posted June 21st, support for Fresh Start Fairhope.

Do I support this new form of government for the City of Fairhope?  Absolutely Should citizens be concerned about the timing of this effort? No. The discussion about the Council-Manager form of gov…

On June 26th the Mayor tried to clear up the confusion while the Council remained silent, something they do as well as playing dumb.

To clear up any confusion. Both petitions being circulated for Council-Manager form of Government create districts and…

On July 10th Chuckee Cheeze, editor of the tabloid Courier, constructed an article around the fact that Kevin Boone filed a complaint against the Mayor and her efforts to clear up the confusion, by appealing to the citizens of Fairhope via social media. Mr Boone’s son is the head of Catalyst. This is the type of intimidation the Fairhope Catalyst Council is known for, and the very reason why we need districts.

In an interview with WABF 1480 AM radio on July 9, Fairhope City Councilman Kevin Boone said he had turned over evidence to the Baldwin County District Attorney’s office that he believed proved …

The Courier has gone from a reputable paper to a Catalyst political tabloid.

Baldwin County politics has always been a good ole boys club and Catalyst hopes to swell those ranks with a slate of candidates that are like minded. Catalyst is a Fairhope based operation that has…

Pay attention to the track record of the 3 B’s and you will realize this is another reason to get rid of “at large” and the good ole boys who have been running the city in THEIR best interests.

The Catalyst Council wishes to silence anyone who questions their actions.

Fairhope First is correct when they accuse the council of “free speech censor”.  They are also correct that the election needs to happen on Oct. 2.

In Fairhope, a perplexing question emerges: Will there or will there not be an election on Oct. 2?

In Fairhope, a perplexing question emerges: Will there or will there not be an election on Oct. 2? The Fairhope City Council, during a special meeting on Wednesday, voted to file an injunction to postpone an Oct. 2 special election to determine whether to change the structure of city government. Proponents of a change to council-manager believe the council is trying to stop the election from happening. The council says there are too many unanswered questions with what the voters are trying to decide.

Chuck Zunk said “Have this election on Oct. 2, and if there are challenges, then let them be heard. But right now, the council is putting itself in a position as a free speech censor, and trying to deduce that some of the residents are having less than 100 percent clarity. I think that prior censorship is a bogus argument.”

THE OCTOBER 2 ELECTION GIVES THE COMMUNITY OF FAIRHOPE THE OPPORTUNITY TO SEND A CLEAR MESSAGE TO THE FOLKS OF CATALYST AND THE “AT LARGE” COUNCIL. 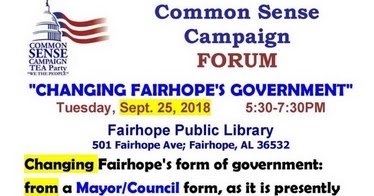 THE ELECTION SHOULD GO FORWARD AND ANY ATTEMPT BY THE COUNCIL TO INTERFERE WITH A FAIR ELECTION, WILL BE THEIR OWN DEMISE.