Chris Elliott was appointed to the Baldwin County Commission by Governor Robert, boobie grabber, Bentley. There is a lot of irony in that appointment and it is not Alabama values. 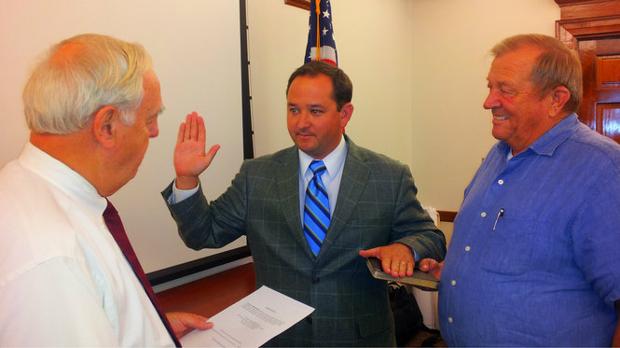 Elliott, is now running for the State Senate seat vacated by the absolutely worst State Senator to ever serve in Alabama, Sen. Tripp Pittman. Alabama values? Pittman took 750,000 of BP money for himself and maintained municipal contracts with Fairhope during the entire time he served as a Senator, while he represented Fairhope. Baldwin County should declare Pittman’s last day a County holiday.

Elliott speaks of Alabama values, “fighting for our fair share”, stopping corruption, taxes, and let’s not leave out Religion and schools. He is hitting all the bases to get elected, slick bs ads and media spots. It is suppose to makes you think Elliott is a seasoned professional. In reality you are talking about a candidate being “placed” in the position, of top dog, where he could best serve Catalyst and the mindset of Catalyst. Truth is Elliott has accomplished little in the last three years.

Catalyst is fully supporting Tucker Dorsey for Baldwin County commission and also is hoping Chris Elliott fills the State Senate Race. These Catalyst dogs need to be kicked to the curb, they need to…

Alabama Values, what the hell does that mean? Is it a reflection of our dubious reputation of being number one in the United States, when it comes to political corruption? No one wants to admit they are dead last however things will never change until we accept the obvious truth.

Elliott’s appointment, or may I say orchestration, was convenient to say the least.

“I wasn’t a commissioner yet, so he decided to chair that meeting. As we get up to speed, I’ll take a more active role,” Elliott said. “We just happened to be going over (Baldwin County Probate) Judge (Tim) Russell’s budget so he was there. When the appointment came down we took a quick break, and I was sworn in before lunch time.”

Alabama values? Elliott once appointed, takes credit for passing taxes. He takes credit for the 1c sales tax which was the renewal of the 2012 penny tax. He did this to garner support from the schools while he used the schools as pawns, and ignored the voters. That is what you call a self serving politician. The voters were denied the ability to vote on a tax that most likely would have passed.

Alabama Values? “ Today, the County Commission unanimously voted to approve a license agreement to allow Baldwin County Sewer to use the right-of-way in fish river area to run a sewer line underneath Fish River,” said Baldwin County Commissioner Chris Elliott Thank God the citizens of the community stood up and stopped him. We all know a vote for Tucker Dorsey is a vote for Baldwin county Sewer.

Last Wednesday, concerned residents of Baldwin County near Fish River met at the Marlow Fish River Fire Station to discuss a plan to put a sewage line under Fish River.

Elliott and Dorsey would sell their souls for votes so a barricade was easy.

Instead of admitting any mistake Elliott and Dorsey double down and blamed the chainsaw operator.

Alabama Values: This is the best example so far;

“There are consequences for my decisions and I will face these consequences. I apologize for my actions and regret any embarrassment that this may cause the County that I serve, the law enforcement officers that keep us safe and my family that I love dearly.”

Elliott says “I will face these consequences” he lied. He used his elected position to reduce the penalties he faced, hired an attorney and changed his story.

Chris Elliott was a partner of Elliott Haygood and Stacy, a political shadow pac under an umbrella of a consultant Company. The infamous Mr Stacy used to brag to his potential candidates that he “guaranteed” they would win if they signed on the dotted line. How can you guarantee someone will win, unless you know how to fix the election? Dane Haygood became Mayor of Daphne and Elliott was appointed to the County Commission, so they went to plan B, and Catalyst was born.

The good ole boy club, Catalyst, is the tip of the spear for the silent power brokers, developers, dark money and corrupt politicians. Catalyst was the new name and the goal was to take total control of the Baldwin County Commission and as many of the Mayor’s seats in all 14 municipalities of Baldwin county. The plan started to unravel with the defeat of Tim Kant in Fairhope. Immediately Catalyst, with the assistance of Fairhope City Council, unleashed a full frontal attack on the newly elected Mayor, Karin Wilson. Catalyst used intimidation and bulling to manipulate the system and Fairhope was key to County Control as well as the County Commission.

They failed to remove Mayor Wilson who dug in on the side of ethics transparency and some very good hires. Catalyst was panicking they knew Pittman was damaged goods and was finally going to disappear. Catalyst threw Elliott’s hat in the ring early, hoping to eliminate competition and securing the Senate Seat. He was to early and other candidates recognized his weakness and affiliation with Catalyst. Three republicans and one Democrat have now stepped up to challenge Catalyst and Elliott.

Elliott then had a falling out with Catalyst and recognized they were becoming politically toxic and he had to distance himself as far as possible, from what he had created. This had to be done while Elliott and Catalyst still held hands under the table.

A vote for Chris Elliott or Tucker Dorsey is a vote for Catalyst. Catalyst has a slate of candidates seeded in positions of County Commission, Probate Judge, Circuit judge, Circuit Clerk and State Senate .

Monday Madness will discuss your options for State Senate Seat 32. Voters have four options, three Republican and one Democrat. Elliott and Catalyst are not an option.